Imagine you sit in a seminar room in Brussels with a small group of people. Imagine you close your eyes and travel out of your body, out of the room, flying higher and higher until you see the street from above, then the city, the country, Europe and finally the Earth. You are floating in space, looking down at the Earth with its oceans and continents and clouds. Eventually, you decide to fly back to Earth. Approaching it, you realise that it looks different. It’s the year 2089.

You arrive at an imaginary museum in the future, in the year 2089. In small glass vitrines you find four artifacts: a piece of formed glass, a small piece of wood, a metal pincer and a braided ring. Why are these pieces in a museum? What do they stand for? What’s their history, what story of transformational change do they tell?

The participants formed small groups: each group was given one of the artifacts and a driver which had an important role in the artifact’s story – either creativity, collaboration, flexibility or empowerment. The groups were then asked to write a story about the artifact.

The exercise encouraged participants to take a different perspective by looking through the lens of creativity and imagining a future with few boundaries, outside the common frames of what is plausible, possible and reasonable.

Creative practices have the potential to challenge present barriers and discourses, and could serve as a tool to catalyse sustainable transformations through their ability to open up different possibilities and spaces for dialogue.

A growing number of artists are working on climate change issues through their creative practices. Indeed, art and creative approaches are increasingly recognised for their potential to challenge current thinking on climate change (Gabrys & Yusoff, 2012) and to present new ways of approaching an issue that is scientifically, politically, economically, socially, and culturally complex, unburdened by the weight of disciplinary constraints (Goehler & Prüss, 2012).

“Art and science interactions can liberate one’s thoughts…. By becoming aware of preconceptions that have been conditioning us unconsciously we are able to perceive and to understand the world in a fresh way and could free habitual responses at various levels.” David Bohm, quantum physicist (1996, p. 49)

From this perspective, a stronger interaction between creativity, science and practice has the potential to change habitual responses, possibly into transformative directions towards a more sustainable future.

“In 2020, when the oil crisis happened, the international community came together to commission a special working group to develop an alternative energy and technology that could provide free, clean and unlimited energy to the masses. Promising developments in nuclear fusion were found in the following decades. In 2040, the working group announced in Oslo that the collaboration of scientists from different countries had allowed the development of a special nanostructure that opened the doors to nuclear fusion on a large scale. This object is a scale model of the space where atoms fuse and release a huge amount of free, clean and unlimited energy.”

“The artifact was discovered, very well preserved, in the ruins of an ancient Greek temple. The earth around it was dated and revealed to be thousands and thousands of years old. It was brought to Athens and installed in a museum there. No one knows its original purpose, but this display of creativity inspired the design of the traditional Greek symbol as a sign of connection, collaboration and relationships in a time when people were spread across all of the islands – nothing begins and nothing ends. This piece is the original object that has been reproduced millions of times as a sign of friendship and connection.” 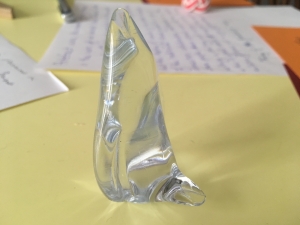 “A glass replica of the last piece of Arctic ice is preserved in the Museum of Transformation in Brussels. Brussels is now a coastal city that has survived thanks to the flexibility of the populations’ planners. Transportation is now by water, instead of road. This piece was chosen as it closely resembles a penguin, a formerly popular and beloved species of bird in the Arctic areas. Despite enjoying a glass of wine from the Ardennes, this piece of glass represents a cautionary tale. We´ve finally reached a zero-net-emission state, unfortunately we’re 50 years too late.”

“In the 50 years up to the middle of the 21st century, humans across the world were very angry. Population rise, a changing climate, financial problems and increased stress led to many people being extremely unhappy. In Venice, during major reconstructive work, this small pincer was uncovered. For years, the smartest minds in the world could not work out what its purpose was, and it was almost forgotten. After many experts had tried to solve this mystery, it was a young assistant at the museum who finally discovered its use.

One evening, he brought a female companion to the museum show her the ornate design of this almost-forgotten artifact, without knowing that true love was the secret to its power. That night, they discovered its ability to extract love and copy it from one person to another.

In later years, the technology behind the artifact was mass produced and people across the globe were empowered with love to act on the issues that unite them. In time, with problems on the way to becoming solutions, the world learned to use love to empower itself without the aid of the technology – by realising that everyone already had the tools to change the world all along.”